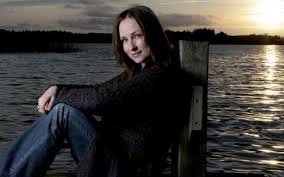 Julie Fowlis (born 1979) is a Scottish folk singer and multi-instrumentalist who sings primarily in Scottish Gaelic. Fowlis grew up in North Uist, an island in the Outer Hebrides, in a Gaelic-speaking community. She has been involved in singing, piping and dancing since she was a child. She is a member of the Scottish sextet, Dòchas, who were voted winners of Best Newcomer award at the Scots Trad Music Awards in 2004, where Fowlis herself was nominated for the Best Gaelic Singer award. In 2005, Fowlis released her first solo album Mar a Tha Mo Chridhe (As My Heart Is). See for more.

“My Love Is On The High Seas

Touch The Sky from the Brave movie soundtrack