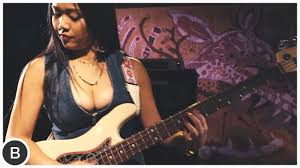 Born and raised in a countryside of  northern Japan. Started writing own music at 11. At 17 started playing the bass guitar , and started bass/vocal solo project. Received Grand Prize at the 2011 OSM(Osaka School of Music) High School Music Camp. Grand Prize at the 2012 Northern Japan Indies Battle, as a reward, live performances were aired on TV for a year. Juna was  invited to Korea for an biggest  Music Fest and performed at the main stage for 3 days ,  appeared on Korean TV. After graduating high school, moved to Tokyo receiving a full scholarship to Showa University of Music. Studied under  Tetsuo Sakurai (ex CASIOPEA. Well knows as Japanese top fusion band. See for more.

The Princess of Funk