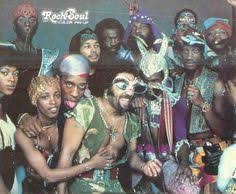 Parliament-Funkadelic is a funk, soul and rock music collective headed by George Clinton. Their style has been dubbed P-Funk. Collectively the group has existed under various names since the 1960s and has been known for top-notch musicianship, politically charged lyrics, outlandish concept albums and memorable live performances. They influenced numerous post-disco and post-punk music groups of the 1980s and 1990s. See for more.

One Nation Under A Groove

Give up the funk

You Hit The Nail On The Head

Standing On the Verge of Gettin’ It On

Comin’ ’round the Mountain

One Nation Under A Groove

Funkadelic – One Nation Under The Groove (Full Album)