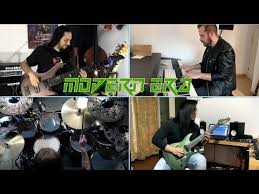 Aran Prog Project is Massimiliano Marfi Gentilini’s solo project. After years of experience as a music teacher and as a musician in bands like ‘Death Keepers’ (with Mike Vescera, Ex Yngwie Malmsteen, ex Loudness) and’ Nerea y los del Callejón (with members of Jarabe de Palo), among many others , Marfi decided, as a big fan of Progressive music, to create an experimental band composed mainly of session musicians, to create her first album, Evo (a concept album dedicated to the nature of existence itself). Although all the songs are composed by Marfi, each member has contributed their arrangements to the project, creating a unique mix of sounds and styles. See for more.

The Expansion of Matter