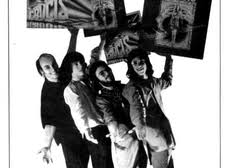 Crucis was an Argentine band considered one of the pioneers of the Argentine progressive rock. Crucis was formed in 1974 by Gustavo Montesano (guitar, vocals), José Luis Fernández (bass), Daniel Frenkel (drums) and Daniel Oil (keyboards). When Fernández left the band, Montesano became the new bass player. Later on Marrone and Kerpel joined the band. In 1975 Daniel Frenkel left the band and Farrugia replaced him. They released two albums, Crucis in 1976 (produced by Charly García who was very famous in Argentina at the time after the demise of folk rock band Sui Generis) and Los Delirios del Mariscal in 1977. See for more.