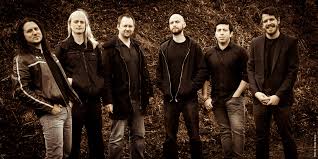 Haken (/ˈheɪkən/) are an English progressive metal band formed in 2007 by multi-instrumentalist Richard Henshall, guitarist Matthew Marshall, and vocalist Ross Jennings. While Henshall, Marshall, and Jennings first had the idea of forming Haken in 2004, they opted to pursue their instruments and songwriting first. Upon recruiting other members three years later, they eventually released the demo Enter the 5th Dimension in 2008, signing with Sensory Records and releasing their first album Aquarius in 2010. As of 2019, they have released five studio albums, an EP, and two live albums. See for more.

Falling Back to Earth

Back to  the homepage