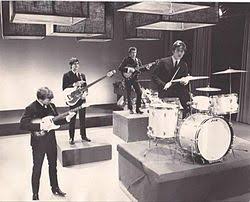 The Searchers is a band from Liverpool who – parallel to bands like The Beatles and Gerry & the Pacemakers – developed the music that would eventually conquer the world as Merseybeat (also known as Liverpool Sound). The band members had been active in various (skiffle) bands since 1957. After various compositions the occupation of The Searchers arose in 1961, as it would break through in 1963 worldwide. Although The Beatles were in fact the forerunners of the Liverpool bands, it was The Searchers who were the first of that generation to break through in the Netherlands. See for more.

Take It Or Leave It

When You Walk In The Room in the Style of

Don’t throw your love away

Sweets For My Sweet

When I Get Home

Don’t throw your love away

What have they done to the rain