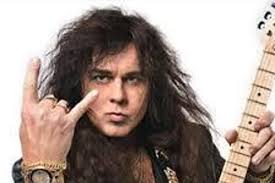 Yngwie Johan Malmsteen (/ˈɪŋveɪ ˈmɑːlmstiːn/; born Lars Johan Yngve Lannerbäck; 30 June 1963) is a Swedish guitarist, songwriter, composer, and bandleader. Malmsteen first became known in the 1980s for his neoclassical metal playing style in heavy metal, and has released 20 studio albums in a career spanning almost 40 years. In 2009, Time magazine rated Malmsteen as number 7 among the 10 greatest electric guitar players of all time. Malmsteen was born Lars Johan Yngve Lannerbäck in Stockholm, Sweden, the third child of a musical family. At the age of ten Malmsteen created his first band, Track on Earth, consisting of himself and a friend from school playing the drums. See for more.

Far Beyond The Sun

As above, So Below