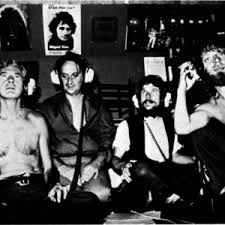 The Cosmic Jokers were a German krautrock supergroup, though they were never a proper ensemble, per se; their music was created from sessions put together by label head Rolf-Ulrich Kaiser and Gille Lettman in early 1973, without the performers’ knowledge. The Cosmic Jokers performed at several acid parties to be held at the sound studio owned by Dieter Dierks, where musicians were offered drugs in exchange for recording tracks. Participants included Manuel Göttsching and Klaus Schulze of Ash Ra Tempel, Jürgen Dollase  and Harald Grosskopf of Wallenstein, and Dierks. Prior to this, all of the musicians had been involved with Kaiser’s Cosmic Couriers label. See for more.