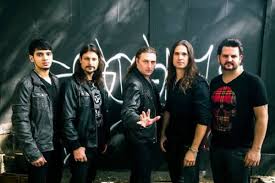 Angra is a Brazilian heavy metal band formed in 1991 that has gone through some line-up changes since its foundation. They have released eight regular studio albums, five EPs and three live CD/DVDs to date. Led by Rafael Bittencourt, the band has gained a degree of popularity in Japan and Europe. Angra was formed in November 1991 by Santa Marcelina Music College students vocalist Andre Matos and guitarists Rafael Bittencourt and André Linhares. They were joined by Bittencourt’s former bandmate Marcos Antunes (drums) and bassist Luís Mariutti (ex-Firebox). See for more.