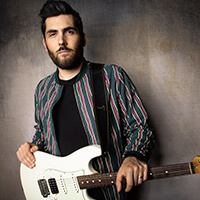 Ariel Posen’s music occupies the space between genres. It’s a rootsy sound that nods to his influences — heartland rock & roll, electrified Americana, blue-eyed soul, R&B, Beatles-inspired pop — while still moving forward, pushing Posen into territory that’s uniquely his own. He turns a new corner with Headway, a solo album that finds the songwriter taking stock of his personal and musical progress. Posen began recording Headway in December 2019, one week after wrapping up international touring in support of his acclaimed debut, How Long. He’d been on the road for a year and a half, playing shows across the U.K., Europe, America, and his native Canada. See for more.

Did You See It Coming (Live)

Nobody Else (Headway World Tour)