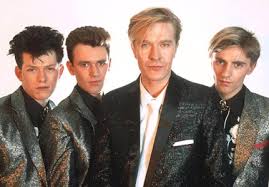 ABC are an English new wave group that first came to prominence in the early 1980s. Their 1982 debut album, The Lexicon of Love, was a UK number one and they achieved ten UK and five US Top 40 hit singles between 1981 and 1990. The band, now essentially singer Martin Fry, continues to tour and released their eighth studio album, Traffic, in 2008. ABC has its roots in the band Vice Versa, a Sheffield band formed in 1977 by Stephen Singleton and Mark White. They founded their own label, Neutron Records, releasing the EP Music 4. Martin Fry, who wrote the fanzine Modern Drugs, interviewed Vice Versa and shortly afterwards they asked him to join as synthesizer player. Fry accepted and by 1980 the band had evolved into ABC, with Fry becoming lead vocalist.See for more.

All Of My Heart

King Without A Crown

how to be a millionaire

The Night You Murdered Love