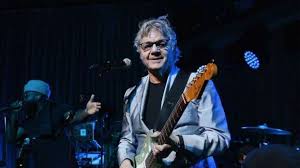 Steven H. “Steve” Miller (born October 5, 1943) is an American guitarist and singer-songwriter who began his career in blues and blues rock and evolved to a more pop-oriented sound which, from the mid-1970s through the early 1980s, resulted in a series of successful singles and albums. Born in Milwaukee, Wisconsin, young Steve received his first exposure to music from his mother, Bertha, whom he described as a remarkable non-professional jazz-influenced singer, and his physician father, George, known as “Sonny” who, in addition to his profession as a pathologist, was a jazz enthusiast and accomplished amateur recording engineer. . See for more.

Take the Money and Run