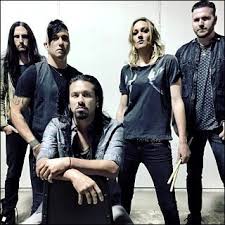 3 Doors Down is an American rock band from Escatawpa, Mississippi, that formed in 1996. The band originally consisted of Brad Arnold (lead vocals, drums), Matt Roberts (lead guitar, backing vocals), and Todd Harrell (bass guitar). The band rose to international fame with their first single, “Kryptonite”, which placed in the top three on the Billboard Hot 100 chart. The band then signed with Republic Records and released their debut album, The Better Life, in 2000. The album was the 11th-best-selling album of the year and was certified 6x platinum in the United States. The group was later joined by drummer Richard Liles, who played during the tour for their first album. See for more.

Away From The Sun

It’s Not My Time

Landing In London (All I Think About Is You)

Let Me Be Myself