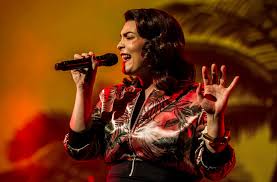 Caroline Esmeralda van der Leeuw (Amsterdam, 26 April 1981) is a Dutch singer, better known by her stage name Caro Emerald. She gained fame with her debut single Back it Up, which was released on July 6, 2009. In January 2011 She was awarded the Pop prize of 2010. Caroline van der Leeuw graduated in 2005 in the Jazz and singing courses at the conservatory. Van der Leeuw sang for her solo career in the Amsterdam Closeharmonygroep Les Elles and sang also in the Philharmonic Funk Foundation, a 44 man strong Funk orchestra. See for more.

You Know I’m No Good

& Waylon This Is a Man’s World live

I know that he is mine

Dream a little dream of me

Mad About The Boy

You’re All I Want For Christmas

You Don’t Love Me