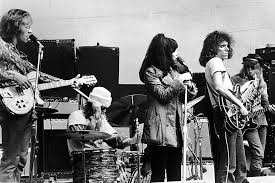 Jefferson Airplane was an American rock band formed in San Francisco in 1965. A pioneer of the psychedelic rock movement, Jefferson Airplane was the first band from the San Francisco scene to achieve mainstream commercial and critical success. The band performed at the three most famous American rock festivals of the 1960s—Monterey (1967), Woodstock (1969) and Altamont (1969) as well as headlining the first Isle of Wight Festival. Their recordings were internationally successful, and they scored two US Top 10 hit singles and a string of Top 20 albums. See for more.

Comin’ Back to Me

The Ballad of You & Me & Pooneil

We Can Be Together

When The Earth Moves Again