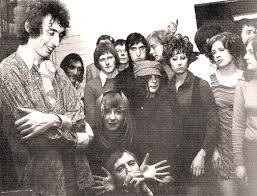 Chicken Shack are a British blues band, founded in the mid-1960s by Stan Webb (guitar and vocals), Andy Silvester(bass guitar), and Alan Morley (drums), who were later joined by Christine Perfect (later McVie) (vocals and keyboards) in 1967. Chicken Shack has performed with various line-ups, Stan Webb being the only constant member.  David ‘Rowdy’ Yeats and Andy Silvester had formed Sounds of Blue in 1964 as a Stourbridge-based rhythm and blues band. They invited Stan Webb, who was leaving local band The Shades 5, to join them. The band also included Christine Perfect and Chris Wood (later to join Traffic) amongst others in their line up. See for more.

Daughter of the Hillside

The House That Love Lives In

When The Train Comes Back

The Thrill Has Gone

featuring Stan Webb ‘You Are The Sweetest Little Thing / Hurt’ 2004

When My Left Eye Jumps