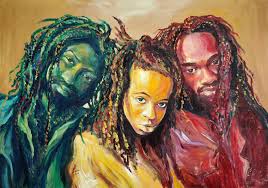 Black Uhuru are a Jamaican reggae group formed in 1972, initially as Uhuru (Swahili for ‘freedom’). The group has undergone several line-up changes over the years, with Derrick “Duckie” Simpson as the mainstay. They had their most successful period in the 1980s, with their album Anthem winning the first ever Grammy Award for Best Reggae Album in 1985. The group formed in the Waterhouse district of Kingston in 1972, initially called simply “Uhuru” (the Swahili word for freedom), with a line-up of Garth Dennis, Don Carlos, and Derrick “Duckie” Simpson. Their first release was a cover version of Curtis Mayfield’s “Romancing to the Folk Song”, which was followed by “Time is on Our Side”; Neither song was a success and they split up, with Carlos pursuing a solo career, as did Dennis, before joining The Wailing Souls. See for more.