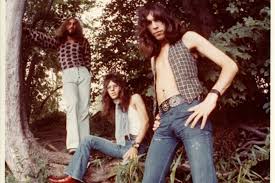 Dust was an American hard rock band active in the early 1970s. Dust was formed in 1969 by Richie Wise and two teenagers, Kenny Aaronson and Marc Bell. The trio’s producer and manager, Kenny Kerner, also wrote the group’s lyrics. Their eponymous debut album was released on Kama Sutra Records in 1971, followed by a sophomore release, Hard Attack, issued on the same label the following year. Although Wise began writing material for a third album, the band dissolved due to lack of promotion and Wise’s interest in producing. See for more.

Walk In The Soft Rain