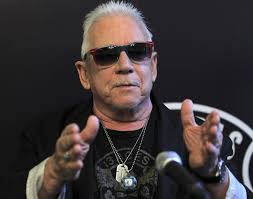 Eric Victor Burdon (born 11 May 1941) is a British singer-songwriter best known as a member and vocalist of rock band the Animals, and the funk band War and for his aggressive stage performance. He was ranked 57th in Rolling Stone‘s list – The 100 Greatest Singers of All Time. Burdon was lead singer of the Animals, formed during 1962 in Newcastle upon Tyne, England. The original band was the Alan Price Combo which formed in 1958. They became the Animals shortly after Burdon joined the band. They combined electric blues with rock and in the USA were one of the leading bands of the British Invasion. Along with the Beatles, the Rolling Stones, the Dave Clark Five and the Kinks, the group introduced British music and fashion. See for more.

Please Don´t Let Me Be Misunderstood

When I Was Young

Bring It On Home To Me

We’ve Gotta Get Out Of This Place

Before You Accuse Me

Poem By the Sea

Squeeze Her, Tease Her

Baby let me take you home