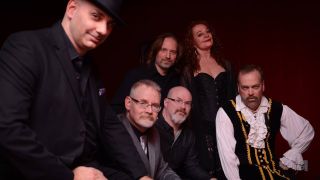 CIRCULINE is an American crossover prog band formed in early 2014 when the prog tribute band DOWNING GREY broke up leaving keyboard player Andrew COLYER, guitar player Bill SHANNON and drummer Darin BRANNON looking for a vehicle to write original material for. They quickly recruited fellow DOWNING GREY alumni Billy SPILANE and Natalie BROWN to fill out the vocal duties.
COLYER, SHANNON and BRANNON started writing the band’s first album, “Return” in February of 2014 enlisting the aid of Randy MCSTINE (LO-FI RESISTANCE, SOUND OF CONTACT, THE PINK FLOYD EXPERIENCE) to assist in the writing process and Matt DORSEY (SOUND OF CONTACT) to lay down the majority of the bass tracks as well as the mixing for the debut. In December, the band brought on bassist Paul RANIERI as a permanent member of the band, completing the lineup. See for more.