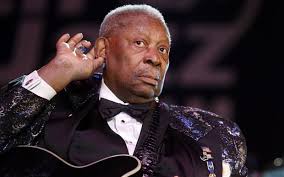 Riley B. King (born September 16, 1925), known by the stage name B.B. King, is an American blues musician, singer, songwriter, and guitarist. Rolling Stone magazine ranked him at No. 6 on its 2011 list of the 100 greatest guitarists of all time (previously ranked No. 3 in the 2003 edition of the same list), and he was ranked No. 17 in Gibson’s “Top 50 Guitarists of All Time”. According to Edward M. Komara, King “introduced a sophisticated style of soloing based on fluid string bending and shimmering vibrato that would influence virtually every electric blues guitarist that followed.”  See for more.

How Blue Can You Get