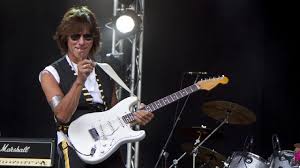 Geoffrey Arnold Beck (born 24 June 1944) is an English rock guitarist. He is one of the three noted guitarists to have played with the Yardbirds (the other two being Eric Clapton and Jimmy Page). Beck also formed the Jeff Beck Group and with Tim Bogert and Carmine Appice, he formed Beck, Bogert & Appice. Much of Beck’s recorded output has been instrumental, with a focus on innovative sound, and his releases have spanned genres ranging from blues rock, hard rock, and an additional blend of guitar-rock and electronica. See for more.

Brush with the Blues

Cause We’ve Ended As Lovers

Live In The Dark

Day In The Life

The Girl Can’t Help It