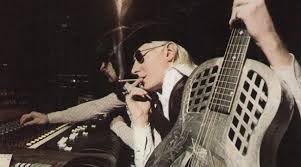 Blues musician Johnny Winter died at the age of 70. He died in a hotel room in Zurich. Guitarist Winter was born in Texas. From childhood he made music; when he was 10 he was already performing together with his brother Edgar. Both boys were albino. For decades, Winter was active as a musician and music producer. His great breakthrough came in 1968. Rolling Stone magazine named him that year, along with Janis Joplin, one of the promises of rock music. A year later Winter was at Woodstock. Grammys. In the seventies he worked with, among others, Muddy Waters.  We’ll miss him. See for more. .

Be Careful With A Fool

Its All Over Now

The Sky is Cryin

Don’t Take Advantage of Me

I Got Love If You Want It