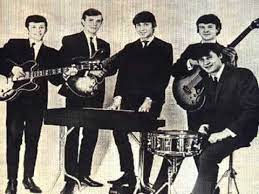 The Fortunes are an English harmony beat group. Formed in Birmingham, the Fortunes first came to prominence and international acclaim in 1965, when “You’ve Got Your Troubles” broke into the US and UK Top 10s. Afterwards, they had a succession of hits including “Here It Comes Again” and “Here Comes That Rainy Day Feeling Again”; continuing into the 1970s with more globally successful releases such as “Storm in a Teacup” and “Freedom Come, Freedom Go”. In 1966, their manager, Reginald Calvert, was shot dead in a dispute over pirate radio stations. See for more.

You’ve Got Your Troubles

Seasons In The Sun

Storm In A Teacup

Ballad of the alamo