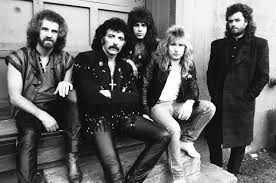 Black Sabbath are an English rock band, formed in Birmingham in 1968, by guitarist Tony Iommi, bassist Geezer Butler, singer Ozzy Osbourne, and drummer Bill Ward. The band has since experienced multiple line-up changes, with Tony Iommi the only constant presence in the band through the years. Originally formed in 1968 as a heavy blues rock band named Earth, the band began incorporating occult themes with horror-inspired lyrics and tuned-down guitars. Despite an association with occult and horror themes, Black Sabbath also composed songs dealing with social instability, political corruption, the dangers of drug abuse and apocalyptic prophecies of the horrors of war. See for more.

Children Of The Grave

End of the Beginning