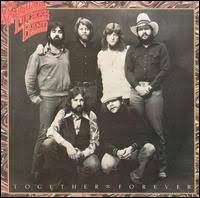 Everyday (i have the blues)

Fire on the Mountain

4 Hours At A Time

In My Own Way

I’ll Be Loving You