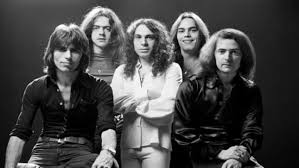 Rainbow (also known as Ritchie Blackmore’s Rainbow or Blackmore’s Rainbow) were a British hard rock band formed in California, controlled by guitarist Ritchie Blackmore from 1975 to 1984 and 1994 to 1997. They were originally established with American blues rock band Elf’s members, though over the years Rainbow went through many line-up changes with no two studio albums featuring the same line-up. In addition to lead singers Ronnie James Dio, Graham Bonnet, Joe Lynn Turner and Doogie White, the project consisted of numerous backing musicians. See for more.

Man On The Silver Mountain

The Temple Of The King