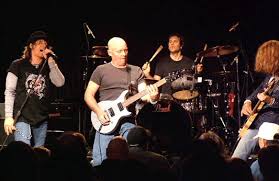 Montrose was a California-based hard rock band formed in 1973 and named after guitarist and founder Ronnie Montrose. The band’s original lineup featured Montrose and vocalist Sammy Hagar, who would later go on to greater fame as a solo artist and as a member of Van Halen. Rounding out the original foursome were bassist Bill Church and drummer Denny Carmassi.[1] The group disbanded in early 1977. Prior to forming the band Montrose, guitarist Ronnie Montrose had been a successful session musician, playing (along with future Montrose bassist Bill Church) on Van Morrison’s Tupelo Honey album produced by Ted Templeman, and on albums by Beaver & Krause and Herbie Hancock. See for more.

Paper Money/ I Got The Fire- Midnight Special 1974

Fight to the Finish