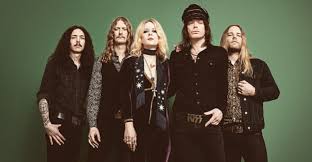 Lucifer is a multinational heavy metal band formed in Berlin in 2014 by frontwoman Johanna Sadonis. Following several member changes, vocalist Sadonis remains the only constant member, with the current line-up featuring drummer Nicke Andersson, guitarists Martin Nordin and Linus Björklund, and bassist Harald Göthblad. Currently based out of Stockholm, the members are Swedish with the exception of the German Sadonis. Although the Oath released their self-titled debut album in 2014 via Rise Above Records to much critical acclaim, the duo of singer Johanna Sadonis and guitarist Linnéa Olsson broke up that same year. Having had big plans for the Oath, Sadonis was devastated but decided to utilize the energy she had and quickly formed Lucifer to continue making music. See for more.

Reaper on Your Heels