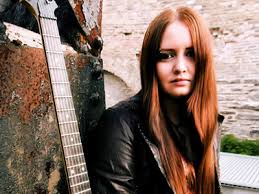 Shannon Marie Curfman (born July 31, 1985, Fargo, North Dakota) is an American blues-rock guitarist and singer. She came to prominence in 1999, at the age of 14, with the release of her first album, Loud Guitars, Big Suspicions, which she recorded a year earlier.Curfman has toured with John Mellencamp, Buddy Guy, George Thorogood and The Indigo Girls. She played and was a guest on The Tonight Show with Jay Leno, the Late Show with David Letterman, Good Morning America, The Late Late Show with Craig Kilborn, The Rosie O’Donnell Show and other television programs.  See for more.

Square in a Circle

Hard To Make A Stand

What You’re Getting Into

Sisterhood of the traveling pants