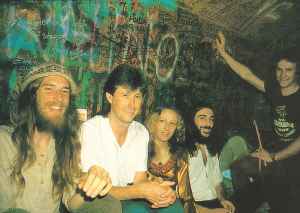 Founded in Milton Keynes, UK in 1980 – Stil active as of 2020.
Formed in 1980, English band SOLSTICE is first and foremost the band project of Andy Glass (guitar), the only musician participating on all the band’s productions and the main composer for the band in it’s various guises. Apart from recording the demo cassette “The Peace Tape” Glass and his companions didn’t produce any recordings in their first years of existence; concentrating on playing live in these early years. Come 1983 and the band had already seen vocalists Sue Robinson and Shelly Patt come and go, and when they hit the studio it was with a line-up consisting of Glass, Marc Elton (violin, keyboards), Mark Hawkins (bass), Martin Wright (drums) and Sandy Leigh (vocals). The result of the studio time was issued as “Silent Dance” in 1984. See for more.

Live at The Craufurd – Encores – Sacred Run and Morning Light

Cheyenne live from the ‘Secret Gig