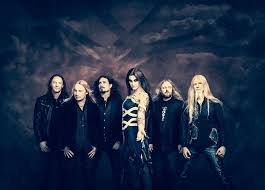 Nightwish originated in 1996 when Tuomas Holopainen spent a night around the campfire with some friends. With acoustic guitar and vocals from Tarja Turunen, he recorded the demo “Nightwish” together with Emppu Vuorinen. The song of the same name is of course also recorded on “Decades”. The triumvirate that has arisen around the campfire has, in their more than 20 years of existence, grown into a six-person world-class formation. The most characteristic band changes are those of the singers. The band started with the Finnish Tarja Turunen who was fired by the band at the end of 2005 – at the end of the “Once World Tour”. See for more.

While Your Lips Are Still Red

Wish I Had An Angel

The Phantom Of The Opera