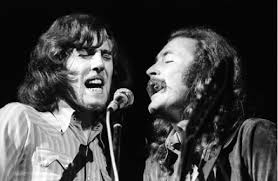 Graham Nash David Crosby is the first album by the partnership of David Crosby and Graham Nash, released on Atlantic Records in 1972, catalogue SD 7220. It peaked at #4 on the Billboard Top Pop Albums chart, and a single taken from the album, “Immigration Man,” peaked at #36 on the Billboard Hot 100 on June 17 and 24,1972. It was certified gold by the RIAA, and it was dedicated to Joni Mitchell, as “to Miss Mitchell.” See for more.

To The Last wale

scared the shit out of me

WIND ON THE WATER

Traction In The Rain