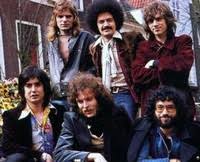 Alquin (pronounced: elkhwin)  is a Dutch pop group from Delft, who enjoyed progressive rock in the 1970s. At the beginning of the 21st century, the band decided to  comeback  and new material was released. The occupation has remained virtually unchanged. Alquin was founded in 1971 as a student band. All members of the band (on bassist Hein Mars na) studied in the early days at the then TH Delft, and the group rehearzed in KSS Alcuin, the Society of the Student Association KSV Sanctus Virgilius in the former Sint-Barbara monastery.  See for more.

I Wish I Could

Fool in the mirror

Convicts of the Air

The Least You Could Do Is Send Me Some Flowers