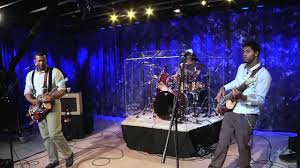 Homemade Jamz Blues Band is an American, Tupelo, Mississippi-based blues trio, consisting of siblings Ryan (vocal and guitar), Kyle (bass) and Taya (drums) Perry. In December 2007, the trio made music history as the youngest blues band to achieve a record deal: the Toronto-based NorthernBlues Music signed the band when Ryan was aged 16, Kyle was 14 and Taya was 9. Their debut album, Pay Me No Mind, was released in June 2008. Homemade Jamz Blues Band has played in blues festivals and concert engagements across North America and Europe; in some sets, their father backs them on harmonica. See for more.

Who Your Real Friends Are

Burned Down the House