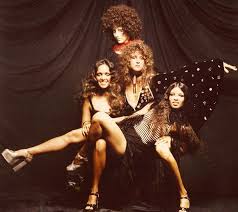 Birtha was an American all-female rock band of the early 1970s. Formed in Los Angeles, the band consisted of Shele Pinizzotto (guitar), Rosemary Butler (bass), Sherry Hagler (keyboards), and Olivia “Liver” Favela (drums). Each of the band members contributed lead vocals and harmonies. Pinizzotto, Butler, and Hagler grew up in Los Angeles and Orange County and played together in bands during their high school years. Both Pinizzotto and Butler were in the Fullerton girl band named The Ladybirds. Afterwards, they formed the group Birtha.  They were joined by Favela in 1968, at which time the group began playing clubs along the West Coast from California to Alaska. Over the next three years, Birtha worked on improving their craft and by 1971 they started to write their own material. See for more.

Too Much Woman For A Henpecked Man

When Will You Understand

My Man Told Me