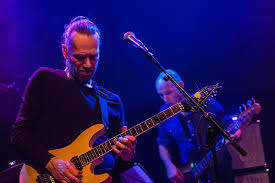 Guitarist/composer Twan van Gerven (1969) started his career as a bandleader, composer and guitar virtuoso of the crossover funk band ‘The Tree Funk Concept’. The pieces written by van Gerven for this formation formed the starting point for his first work for chamber orchestra ‘The King of Sushi’. As a guitarist, Van Gerven gained fame in the band ‘BEEF! ‘, awarded with a Silver Harp in 2002 and named ‘Best Guitarist of the Netherlands ‘ by winning the Devilin 2004. Van Gerven’s compositions cover a large musical area; from classical work for two instruments to composed jazz fusion for small and large band occupations, from chamber music to symphony. On 19 June 2005, the symphony ‘The Woensel West Side Story’ premiered at the TU in Eindhoven, performed by the Helikon Orchestra conducted by Kian Pin Hiu. See for more.

The making of “Catch a Vibe” part III …