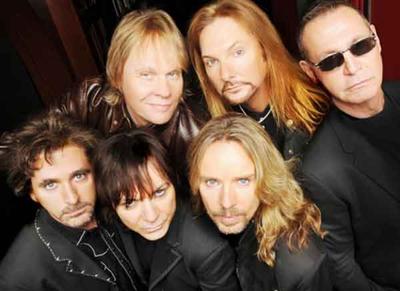 Styx (/stɪks/) is an American rock band from Chicago that formed in 1972 and is best known for melding hard rock guitar balanced with acoustic guitar, synthesizers mixed with acoustic piano, upbeat tracks with power ballads, and incorporating elements of international musical theatre. The band established itself with a progressive rock sound in the 1970s, and began to incorporate pop rock and soft rock elements in the 1980s. Beginning with Styx in 1972, the band usually released an album every year throughout the 1970s. Styx II (1973) had the sleeper hit “Lady”, a power ballad which reached No. 6 in the US, helping the album make the top 20. “Lady” was also a top 20 hit in Canada, Australia and New Zealand. Equinox (1975) and Crystal Ball (1976) reached the US top 70 with the first featuring “Lorelei”, a No. 6 hit in Canada, while the second marked the addition of Tommy Shaw to the band. See for more.

Boat On The River

Man In The Wilderness

The Best Of Times

Sing For The Day