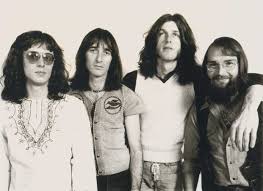 Finch (1974–1978) was a Dutch progressive rock group that continued to be  known internationally years after their final concert on 14 November 1978 at the  Nederlands Congres Centrum in The Hague. Finch was established by bass player Peter Vink (Vink meaning finch in Dutch) and drummer Beer Klaasse. Guitarist and  composer Joop Nimwegen, who had worked with Vink in the Dutch formation Q65, soon joined. For lack of a good singer, Finch decided to build a repertoire of instrumental rock.  Keyboardist Paul Vink joined, but was soon replaced by Cleem Determeijer, then a  student at the Rotterdam Academy of Music. See for more.

With Love As The Motive

Unspoken Is The Word