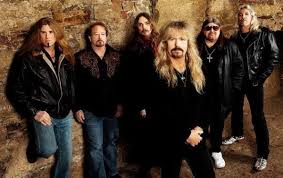 Molly Hatchet is an American southern rock/hard rock band formed in Jacksonville,  Florida, in 1975. They are known for their hit song “Flirtin’ with Disaster” from  the album of the same title. The band, founded by Dave Hlubek and Steve Holland, took its name from a prostitute who allegedly mutilated and decapitated her clients. Most of Molly Hatchet album covers feature heroic fantasy inspired art, some of which were painted by artists Frank Frazetta and Boris Vallejo. See for more.

Down from the mountain

Fall Of The Peacemakers

No Stranger In The Darkness