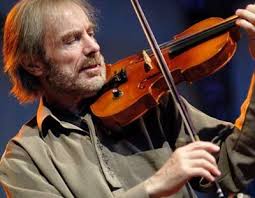 Jean-Luc Ponty is a pioneer and undispute master of violin in the arena of jazz and rock. He is widely regarded as an innovator who has applied his unique visionary spin that has expanded the vocabulary of modern music. Ponty was born in a family of classical musicians on September 29, 1942 in Avranches, France. His father taught violin, his mother taught piano. At sixteen, he was admitted to the Conservatoire National Supérieur de Musique de Paris, graduating two years later with the institution’s highest award, Premier Prix. In turn, he was immediately hired by one of the major symphony orchestras, Concerts Lamoureux, where he played for three years. See for more.

Once a Blue Planet

The Gift of Time

Upon wings of music full album