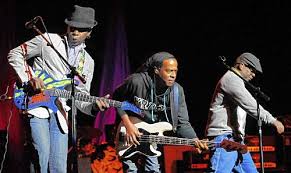 Living Colour is an American rock band from New York City, formed in 1984. Stylistically, the band’s music is a creative fusion influenced by free jazz, funk, hard rock. Their lyrics range from the personal to the political, in some of the latter cases attacking Eurocentrism and racism in America. Living Colour rose to fame with their debut album Vivid in 1988. Although the band scored a number of hits, they are best remembered for their signature song “Cult of Personality”, which won a Grammy Award for Best Hard Rock Performance in 1990. See for more.

Open Letter To A Landlord