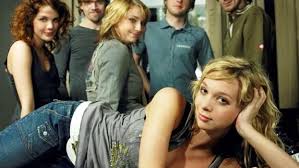 Krezip was a Dutch band from Tilburg, formed in 1997. It was notable for the band members’ young ages during their original breakthrough. The band has had several successful albums and singles in Belgium, Luxembourg, and the Netherlands. The origin of their name remains unclear, though a popular explanation is that the name is an anagram of “perzik”, the Dutch word for “peach”. In 2008 Krezips breakthrough single I Would Stay was given a one-time-only people’s choice based award for ‘all-time best Dutch single’, by Dutch national radio station 3FM. See for more.