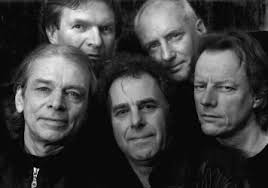 The Bintangs is the name of one of the oldest Dutch pop groups. The group was founded in 1961 in Beverwijk by Frank (bass, vocals) and Arti Kraaijeveld (guitar, vocals). One played gym (Bintang means ‘ star ‘ in Indonesian and is also a beer brand) but quickly moved into a rugged kind of rhythm & blues. The performances were exciting and the Bintangs became a kind of Dutch Rolling Stones-the Mick Jagger-like voice of Gus Pleines certainly contributed to that. The Bintangs knew a lot of occupations, with Frank Kraaijeveld as (almost) constant factor. See for more.

Ridin’ on the L&N

Travelling in the USA

Hound Is On The Run

I’m gonna let you down