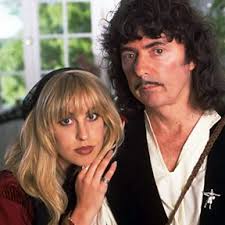 Blackmore’s Night is a British/American traditional folk rock band formed in 1997, consisting mainly of Ritchie Blackmore (acoustic guitar, hurdy gurdy, mandola, mandolin, nyckelharpe and electric guitar) and Candice Night (lead vocals, lyricist and woodwinds). Their lineup has seen many changes over the years. To date, they have released ten studio albums. Candice was a Rainbow fan, and first encountered Ritchie Blackmore to ask him for an autograph in 1989, while she was working for a local New York radio station. The two started living together in 1991, and discovered they both had a passionate interest in Renaissance music. See for more.

The Circle Live In York

Under a Violet Moon

Ghost of a Rose

Temple of the King