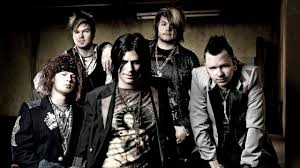 Hinder is an American rock band from Oklahoma that was formed in 2001 by drummer Cody Hanson, guitarist Joe ‘Blower’ Garvey, and former lead singer Austin Winkler. The band was inducted into the Oklahoma Music Hall of Fame in 2007. Before the band formed, Austin Winkler sang in an Oklahoma City cover band until July 2001, when he met drummer Cody Hanson and guitarist Joe Garvey at a college party. Soon after meeting, the three formed Hinder and began performing at an Oklahoma City club called The Blue Note, building a local fan base. See for more.

Lips Of An Angel

Born To Be Wild


What Ya Gonna Do

Should Have Known Better