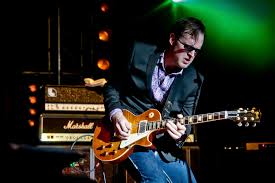 If you’ve always wanted to know how versatile Joe Bonamassa was, then you’re all right with ‘Tour De Force – Live In London’. Divided over four days, 12,000 fans in four sold out London venues witnessed all the talent Joe Bonamassa has. From the intimate The Borderline to the prestigious Royal Albert Hall, each evening was characterized by a specific theme. During the ‘Borderline’ show we hear songs from his first albums, accompanied by only a drummer and a bass player. At the ‘Hammersmith Apollo’ show all brakes are released and it’s time to rock up a lot. The ‘Royal Albert Hall’ show goes in all directions; from an acoustic set to a complete electrical set with all the biggest hits and most popular songs. See for more.

With Beth Close To My Fire

Tour De Force – I Know Where I Belong

Asking Around For You / Tour de Force

Tea For One – Tour de Force