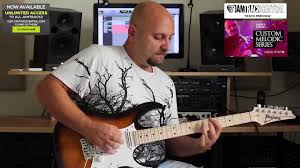 Born in 1980, his first attempt with music came in 1984 when he played with his parents (both musicians) in Schwetzingen, Germany during an encore. But the story starts in 1989 when he received his first electric guitar as a gift: “a Washburn but I don’t remember the model“. He started to play along with his heroes (Michael Jackson, Van Halen, Europe), while other kids his age usually preferred to play soccer. In 1992 he left the guitar to study the drums, another huge passion. “Being a drummer first and a guitarist second, helped me a lot in terms of creativity and rhythmic knowledge.”. See for more.

Song Of Ben And C