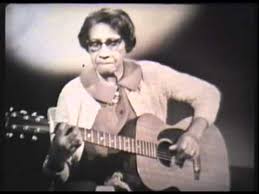 Elizabeth “Libba” Cotten (née Nevills) (January 5, 1893 – June 29, 1987) was an American blues and folk musician, singer, and songwriter. A self-taught left-handed guitarist, Cotten developed her own original style. She played a guitar strung for a right-handed player, but played it upside down, as she was left-handed. This position required her to play the bass lines with her fingers and the melody with her thumb. Her signature alternating bass style has become known as “Cotten picking”. Cotten was born in 1893 to a musical family near Chapel Hill, North Carolina, in an area that would later be incorporated as Carrboro. Her parents were George Nevill (also spelled Nevills) and Louisa (or Louise) Price Nevill. Elizabeth was the youngest of five children. See for more.

In the Sweet By and By

Oh Babe It Ain’t No Lie

Look and Live, My Brother

Going Down the Road Feeling Bad